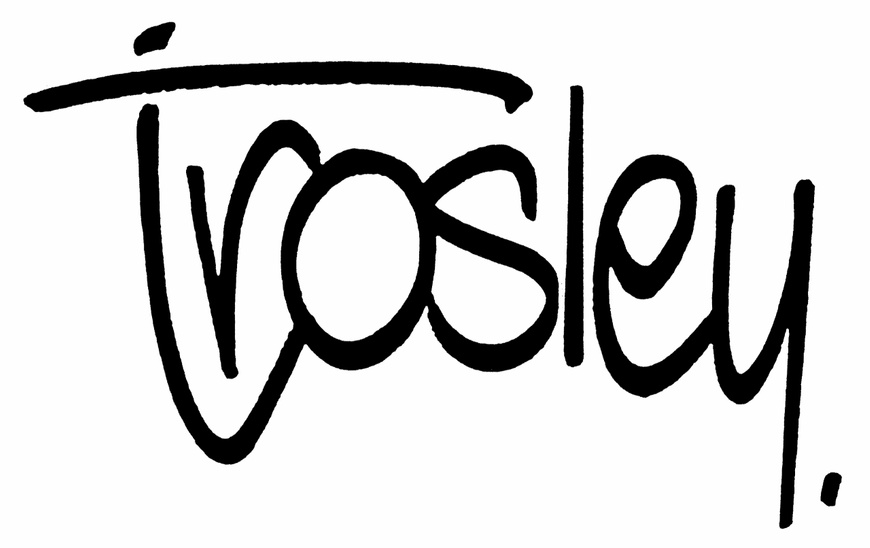 He's often recognized as one of the contributing artists who rendered CARtoons magazine, Hot Rod Cartoons, and CYCLEtoons for Petersen Publishing. However, many national magazines and newspapers have bought and published Trosley's humorous art.

A free-flowing style and right-on appreciation of the human condition are what attract automobile magazine editors to George's work. A master at composition and line quality. George has his finger on the pulse of the car-crazy community in all its rabid devotion and peculiarities. It's most likely due to the fact that George often illustrates his personal passion for automobilia. He can instantly relate what's funny about his own unusual habits, as well as that of other car nuts. Here's what George has to say about himself and his profession:

I was born in 1947 to hardworking, middle-class parents, George and Hazel, from Woodlyn, Pennsylvania. As a middle child, I grew up with my older sister, Beverly, and younger brother, Harold. I'm told I was drawing from the time I could hold a crayon. Mom claims she could always keep me quiet with a pencil and a piece of paper.

My fourth-grade teacher, Mrs. McLauglin, was an amateur artist who noticed my inclination and recommended private art lessons from a local painter, which my parents provided until I hit my teens.

Cars were always a major interest for my brother and me and we drew our "dream machines" all the time. We also built model cars while growing up. I could come up with wild customizing ideas and used plastic wood to mold parts from one kit to another. My brother had the patience and body-working talent to turn them into prize-winning creations. Car magazines like R&C constantly fed us fresh concepts and current styles, and we ate 'em up. We began winning almost every hobby-shop model contest around- and were eventually banned from a few.

Before long we had our driver's licenses and real cars to fool around with. My first car was a '47 Plymouth sedan that leaked a quart of oil a day and smoked two more out the tailpipe. That was followed by a '55 Ford Tudor with a 312ci T-Bird engine and trans and a severe rake. I lettered "Village Vandal" on the trunk lid, much to my mom's grief. I graduated from high school in 1965 and was accepted to the Hussian School of Commercial Art in Philadelphia. I commuted in my recently acquired '39 Ford Deluxe Tudor sedan and spent the next four years learning about commercial art by day and the workings of a prewar Ford by night.

After art school, I landed jobs in various art studios in Philadelphia but found much of the work unrewarding and repetitious. in 1973, I jumped out on my own to give full-time freelance cartooning a try.

I'd always been a major fan of Pete Millar and Petersen CARtoons, so I dropped it into gear. Eventually, editor Dennis Ellefson gave me the opportunity to do some of my reoccurring characters. I created Krass and Bernie, largely patterned after my brother and me. They ripped apart and rebuilt tons of weld rods for the next 20 years... and I loved it! During this period, I also produced hundreds of cartoons and humorous illustrations for various other car magazines including Rod&Custom. My other work has been published in a variety of magazines such as the Saturday Evening Post, Saturday Review, National Enquirer, New Woman, and Hustler.

Unfortunately, I sold the '39 when I began freelance cartooning. My long-time girlfriend, Susan, and I married in 1973 and after buying a house bought a '40 Ford Deluxe Tudor sedan to work on too.

In 1977, our daughter, Andrea, was born and we sold everything to buy a bigger house on a small lake in Riddley Park, Pennsylvania. In 1989, our son, George III, was born, and a new studio was added upstairs with skylights and a balcony overlooking Ridley Lake. I've been thinking it's just about time for another prewar Ford and Georgie thinks it oughta have flames... The kid's got it !!

Welcome! Check out my new announcement.